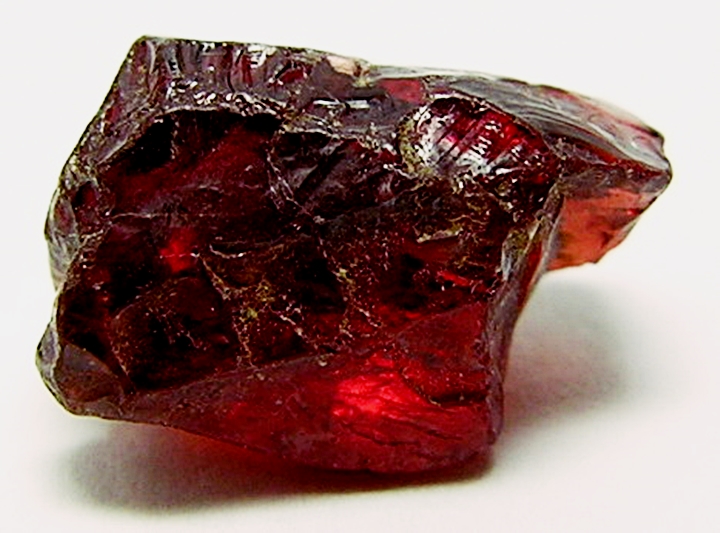 The name pyrope comes from the Greek word meaning "firelike," and this variety of gamet is typically red. Pyrope is less common than most garnets, but it is widely used as a gemstone. Pyrope is difficult to distinguish from almandine without a spectroscope, but it usually displays fewer flaws and inclusions. High-chromium varieties from volcanic pipes (such as diamond pipes) are known as chrome pyrope.

Properties and characteristics: Nearly all pyrope comes from ultramafic igneous rocks, which also contain olivine and/or diamond. Metamorphic pyrope occurs when these igneous rocks are metamorphosed, and also from rooks that are rich in magnesium. Almandine and pyrope comprise a series in which iron replaces the magnesium in pyrope. In fact, pure pyrope is very rare in nature and the various proportions of the two minerals are known as pyrope- almandine mixes. One intermediate stone between the two is the variety called rhodolite, which is a rich red-purple colored stone. A rare intermediate between pyrope, almandite, and spessartine is a color-change garnet from Madagascar, which is blue in some lighting.

Cutting, setting, and valuing: Red pyrope is very dark in tone, or occurs in small sizes (so-called "ant hill garnets"). Because of this, gems are rarely faceted (as mixed or brilliant cuts) in sizes over one carat. Stones over two to three carats are the most valuable. American and South African pyropes are lighter than those from Bohemia: lighter, brighter stones are more expensive than darker stones, with pale pinks and reds, and brighter reds, purples, and pinks commanding the highest prices. The very light pink pyropes from the Dora Massif are often shattered and so rarely occur as large stones.