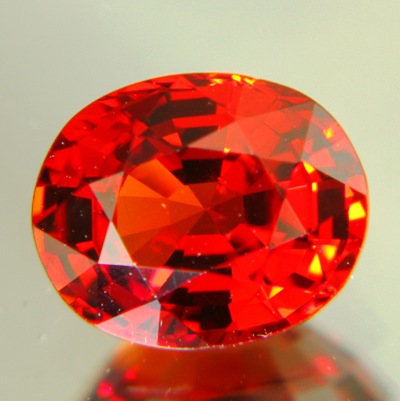 This garnet is named after Spessart Forest in Bavaria, Germany, where it was first found. Until a discovery in the early 1990s of bright orange stones in Namibia (where the stone became known as mandarin garnet), spessartine was infrequently seen in jewellery. Demand for it is, however, growing because of the gem's excellent hardness and brilliance, which is the result of its very high refractive index.

Properties and characteristics: Like other garnets, spessartine inevitably occurs in a blend with other species. Gems with the highest spessartine content are soft orange in colour, while those that contain more almandine are reddish to red-brown. Manganese is the main element that gives spessartine its orange colour. An increased iron content makes the stone darker and/or reddish. Inclusions can appear feathery or lacelike. Spessartine can be found in both metamorphic and igneous rock.

Cutting, setting, and valuing: Spessartine is less common than most other garnets and does not usually occur as transparent, gemstone quality specimens, Rare mandarin garnet from Namibia is expensive since it is hard to come by. The other valuable spessartines are a bright, orangish-red. These formerly came from Ramona, California, and Amelia Courthouse, Virginia (USA), current sources include Pakistan, Nigeria, and Brazil. Spessartine is normally cut either in facets or en cabochon.